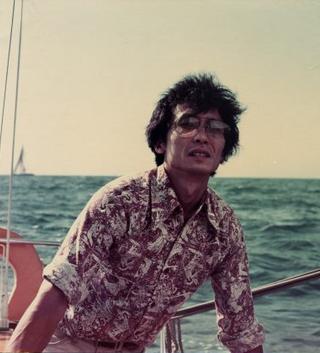 Ray grew up on the north side of Chicago attending local public schools.​​​​​ As early as ​kindergarten Ray Yano sensed a natural ability in painting. During art sessions in elementary school his teachers took notice and asked how he was able to paint the way he did. Unexplainable at the time he simply said, "that's how things looks". In high school he received an art award for after school art classes at the Art Institute of Chicago. With this introduction into the world of fine art he took several classes during the summer. He seriously considered continuing his art education after graduating high school, but also displayed an ability in the sport of gymnastics. University coaches were eagerly recruiting potential team members and simplified for him the college admission process. Ray was soon on the varsity gymnastics team enjoying the

excitement of competition. One school in particular offered a design curriculum with a  philosophy more in keeping with his exploratory nature. His design instructors had previously split from the American Bauhaus established School of Design in Chicago. Their approach to design education emphasized a broad ranging education rather than technique specialization. In addition to Bauhaus trained instructors, the department had as research professor, the visionary R. Buckminster Fuller.

After graduating with a B.A. degree, Ray joined the Peace Corps only to find a misfit application of his personality and education. Exiting the Peace Corps he then quickly enlisted in the Naval Air Reserves to fulfill his military obligation. In 1966, after finishing his active duty training, Ray drove out to Southern California to apply his visionary design education. His broad based education, that ranged from graphic design to site planning and urban design, enabled him to secure a position as a urban planner, first with the City of San Diego and later with the Los Angeles Planning Department, Advanced Planning Division.

After four years in urban planning, Ray sought more operational and creative freedom. With a need for independence he developed an entrepreneual approach to design in the business world. As an owner of several firms he was able to achieve financial independence, but throughout the years found himself dedicated to fine art painting, his true calling. The coast of Southern California and offshore sailing has influenced his observation of nature. The Pacific Ocean with its ever changing motion from tranquil to devastating power became a challenge to capture. Once out to sea Ray began to understand its timeless wonder.